You are here: Home>People>Archbishop John Healy 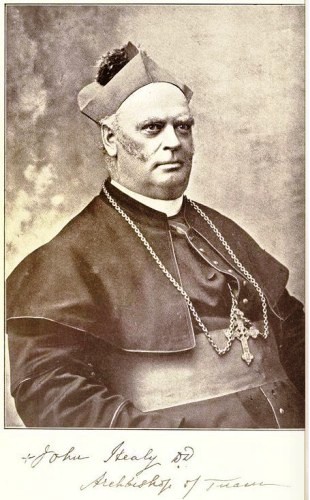 The voice of God again calls us, at the beginning of the Lenten season to turn away from our sins and to renew our penitential works of prayer, fasting and almsgiving. His voice is imperative; no-one dare despise it; no-one can plead exemption, because no-one is free from sin and its consequences. The call to penance is heard with emphatic urgency both in the Old Testament and the New; “Now, therefore, saith the Lord,” by the Prophet Joel, “be converted to Me with all your heart in fasting, and in weeping, and in mourning. And rend your hearts, and not your garments, and turn to the Lord your God: for he is gracious and merciful, patient and rich in mercy, and ready to repent of the evil.” (Joel ii. 12, 13) …

In that sustained effort to work out your salvation there is nothing else will give you more effective help than the practice of the great Christian virtue of temperance. Taken in its wide sense, temperance means the restraint from indulgence in intoxicating drink, which is the most fruitful root of sin and crime and amongst us. But, thanks be to God, of late years there has been a most striking improvement here in the West of Ireland in this matter of temperance. This we owe, mainly, under God, to the round of temperance missions which have been held in all the parishes of this province. They have, from every point of view, produced the most gratifying results, and we earnestly implore the clergy to make these results permanent by adopting the means suggested in the report of the Provincial and Diocesan Committees …

In virtue of authority delegated to us by the Holy See, we grant the following dispensations in the fast and abstinence:-