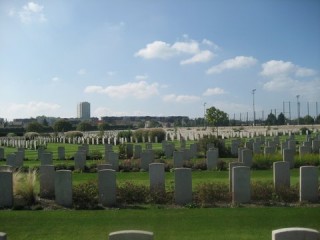 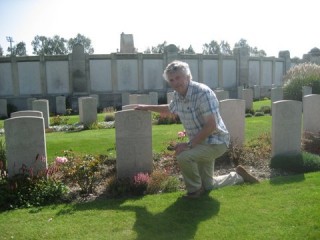 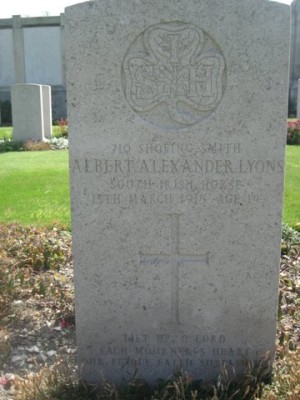 My uncle, Albert Alexander Lyons was born at Tullaboy on 20th April 1895. His twin brother, Arthur James, died three months later on 7th July and his sister, Sophia the eldest member of the Family of Tomas Henry Lyons and Eleanor Kathleen (Maclean), was then just two years old. Later additions to the family were my aunt Florence Kathleen (born 27th July 1900) and my father, Thomas James (born 29th January 1903)

Albert was enrolled at Leam School on 2nd July 1907 having previously attended Shindilla School at Maam Cross. Growing up on the farm at Tullaboy, Albert would have had much experience with horses and ponies and this may have influenced his decision to join the South Irish Horse regiment of the British Army on 4th August 1914 when he was just over 18 years of age.  He was soon sent off to war in France where he served as a shoeing smith and where he died on 13th March 1915 just one month short of his 20th birthday.

He is buried in St. Sever Cemetery, Rouen, France close to a place where a number of field hospitals were located during the First World War. His grave is A.5.6.

A certificate, issued by the Recruiting Authorities in Ireland, and which was sent to his parents states “This is to certify that Albert A Lyons of  Maam Cross entered on active service to defend the liberty of his country on 4th August 1914, trooper South Irish Horse. Died in March 1916[1] from illness contracted on Active service”.

The illness referred to is pneumonia although mention has also been made of  Weil’s disease which he might well have contracted following a rat bite received in the trenches.

A note with these issued by the Record Office in Canterbury on 4th April 1922 reads “I am delighted to transmit to you the accompanying British War Victory medal which would have been conferred upon No. 710 Private A. Lyons South Irish Horse had he lived in memory of his services with the British Forces during the Great War. In forwarding the decoration I am commanded by the King to assure you of His Majesty’s high appreciation of the services rendered. I am to request that you will be so good as to acknowledge the receipt of the decoration on the attached form. I am your obedient servant. M. Whitehead”

I am sure that thousands of these letters were written with the exact same wording and it is unlikely that the King knew the names of those young nineteen year-old soldiers.

In addition to the three medals referred to above, we also have a large 12cm  circular bronze plaque with the name Albert Lyons and the inscription: “He died for Freedom and Honour”