Medals for Oranmore and Clarinbridge 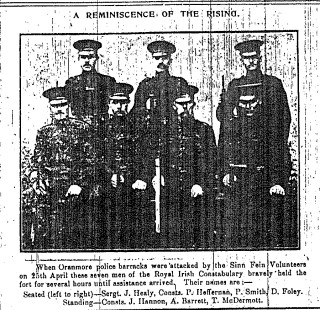 ‘On Wednesday, at the Viceregal Lodge, Dublin, a number of R.I.C. were presented with the Constabulary Medal, one of the most coveted distinctions that could be obtained by members of the force, for gallantry and devotion to duty during the “Rising” of Easter Week. Several R.I.C. men stationed in the Co. Galway were made the recipients of this disctinction, their names being – Co. Galway (W.R.) – Clarenbridge District – Acting-Sergt. Samuel McCarthy, Constables McShane, Conlon, Lavelle, Shea. Oranmore District – Sergeant healy, Constables Smyth, Foley, Barrett, Hannon, Heffernan. The presentations were made by his Excellency the Lord Lieutenant. Mrs and Master Smyth, wife and son of Constable Smyth, were also presented, the former with a piece of plate, the latter with a gold watch.’ 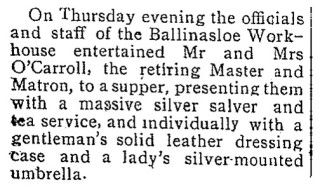 ‘On Thursday evening the officals and staff of the Ballinasloe Workhouse entertained Mr and Mrs O’Carroll, the retiring Master and Matron, to a supper, presenting them with a massive silver salver and tea service, and individually with a gentleman’s solid leather dressing case and a lady’s silver-mounted umbrella.’