A proposition which roused the females’ ire

‘Most Rev Dr. O’Dea, Bishop of Galway, has made the following cases “reserved sins” in his diocese, in connection with which only the Bishop has power to absolve the penitent:

(1) The taking of a false oath or committing perjury.

(2) Outrages to houses or property at night.

(4) Distributing drinks at wakes or funerals.’ 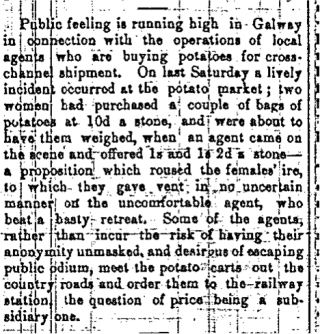 ‘Public feeling is running high in Galway in connection with the operations of local agents who are buying potatoes for cross-channel shipment.  On Saturday last a lively incident ocurred at the potato market; two women had purchased a couple of bags of potatoes at 10d a stone, and were about to have them weighed, when an agent came on the scene and offered 1s and 1s 2d a stone – a proposition which roused the females’ ire, to which they gave vent in no uncertain manner on the uncomfortable agent, who beat a hasty retreat.  Some of the agents, rather than incur the risk of having their anonymity unmasked, and desirous of escaping public odium, meet the potato carts out the country roads and order them to the railway station, the question of price being a subsidiary one.’